When I was in my early 30s, I concocted a theory about age groups. On either side of the spectrum, there were the two extremes, “young” and “old.” In the middle, my theory went, you had the “old youngs” – people in their early 30s who were aging out of true youth but who hadn’t quite yet moved on to the next stage – and the “young olds”, those who were teetering dangerously on the edge of “old” but who could still, in some lighting and situations, pass for someone in their early 30s.

At the time, I considered myself firmly an “old young” and assumed that by my mid-40s, I’d be smack dab in the world of “young old.” The thing is, now that I’m 44, I feel neither old nor young. I don’t care about “passing” for my 30s anymore, but I’m active and healthy. I still dream up big ideas that could take decades to unfold, and I’m nowhere near thinking about retirement. I’m not old. I’m not young. I’m…in the middle. Which, I suppose, makes me the very definition of middle-aged.

In my teens and early twenties, “middle age” seemed impossibly far away, a time of life inhabited by paunchy, balding men and women sporting cat sweatshirts and feathered wash-and-wear haircuts. As I moved into my mid-30s and considered my social circles, though, I noticed that middle age looked a lot different than I’d expected it to. The sharp distinctions in style and looks I expected to see between 30-something me and the women I knew in their mid-40s and beyond just didn’t exist – in many cases, the older women looked more stylish and pulled together than my peers and I, and seemed to be having more fun as well. At some point in my early 40s I began to realize that there was not going to be an obvious outward sign that I had “entered midlife” and left young-woman-life behind. In fact, I realized, it was possible I was already there.

At first, this was a disturbing thought. But the more I pondered, the more I liked the idea of being middle-aged. And while I know a lot of people believe that you aren’t really in “midlife” until closer to 50, at 44 I’m beginning to embrace the idea that I’m now at least starting that journey.

So…why does any of this matter? I’ve never been into labels, and defying other people’s expectations is one of my favorite things to do. But so is being fair to myself and in touch with reality. Being middle-aged isn’t a slur or a death sentence. Midlife is simply a phase, and not a bad one at that. (I’m young enough to remember middle SCHOOL, for example, and I think midlife is incalculably better.)

The way I see it, embracing the stage I’m in, instead of wishing I was younger or trying to delude myself that “middle age” is still a decade away, allows me to dig in and learn more…and the more I know, the better I’ll be able to ride out whatever challenges are coming and make the most of the benefits.

When I was pregnant with my first baby, I remember being completely fascinated by the physiology of what was happening inside my body at the time. I read every book and article I could get my hands on about pregnancy and labor and birth and breastfeeding, then on infant development, nutrition, and common childhood illnesses. I was a bit obsessed, really, but I think it made me better prepared for the transition to motherhood and a more engaged mom. Why not bring that same level of curiosity to whatever is this stage, even if it’s a lot more self-focused?

We’ve all had our chance to be young. And most of us will also eventually be old. As for me, I’m content right now to be where I am: right in the middle. Midlife, middle-aged, “young old”, whatever you call it – there is plenty to live and learn and experience, right where I am. 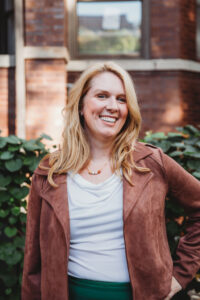